Why “Email Blast” Embodies the Worst of Email Marketing

A friend of mine is a marketing coordinator at a real estate company. Part of her job is to send out a weekly email update. She calls it “the eblast”.

Every time I hear this word, I twitch.

So far I have refrained from telling her all the reasons I hate the term eblast or email blast. She clearly doesn’t like sending the email and doesn’t think too highly of it, so correcting her email marketing terminology is not likely to be a fun conversation. But I do think "eblast" is worth talking about with you. If you’re an email marketer, you’re probably annoyed by the term “eblast” or “email blast” too.

I’ve talked to several email marketers who hear this term regularly. All of them hate it. As @Anniepoohster tweeted at the close of this year’s Email Evolution Conference:

Can we all agree that the word e-blast should die a quiet death? #eec15

A few of years ago email rockstar DJ Waldow wrote, “It’s time we eliminated the phrase “email blast” from our vernacular.”

More recently, the blog Spinweb.net published a post “Top 5 Terms That Inbound Marketers Hate” that put “eblast” right at the top of the list of terms that grate on our nerves. Here’s why they hate it:

This one really ruffles our feathers because it implies that you are shoving a bunch of spammy emails down your unsuspecting audiences throats. Blast away! In reality, we want email to be strategic, targeted, personalized, and properly segmented. Additionally, we want the content to be simple, direct, to the point, and useful. With this in mind, the word "blast" seems a bit too intense.

What is an eblast?

In loose usage, an eblast is just another word for an email campaign. But that’s not really the whole story. It’s the connotations that eblast holds that makes us marketers hate it so. This definition of eblast from Urban Dictionary shows some differences between the two terms:

A standard industry term used in email marketing to describe the act of "blasting" a message out to a group of hundreds or thousands of people simultaneously, similar to the act of "blasting" a verbal message out with a loud speaker. Typically used to differentiate between two-way email interactions (where a customer emails a question and the company responds), and one-way bulk email interactions (such as newsletters or promotions).

"Tell marketing that we definitely need to add a coupon code to our upcoming July e-blast." by gobo760 June 29, 2013

This is the definition that’s closest to what my friend means, and to what most marketers or consumers mean when they say eblast. It’s also closest to the usage you’ll find for the word if you search for it on Twitter. Tweets like this, for instance:

Have you seen our Spring Blowout eblast? Discount prices only good till Sunday at 11:59PM! | Woodbury Outfitters… http://t.co/Sma02MWpo6

How many people use “eblast”?

Not too many. Fortunately, the use of “eblast” or “e-blast” is dwarfed by the word “newsletter”, as this graph from Topsy shows so clearly. 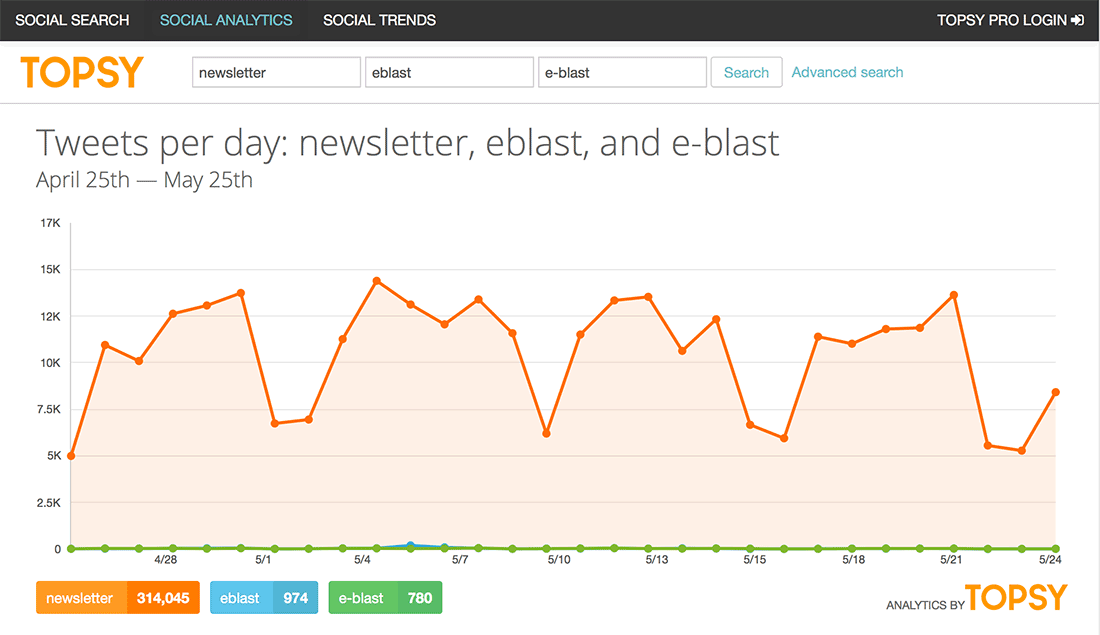 Even though few people use “eblast”, the teeth grinding remains. And really, at least some of the teeth-grinding is our own problem. Eblast cuts a little too close to some of our insecurities. The frustration with the term eblast is just at the surface of a whole bunch of issues email marketers have.

Email marketers are terrified of being labeled spammers

I’d rather not shift into being an email marketing therapist, but I’m not the first email marketer to have issues about being called a spammer. I, too, have been asked what I do in a social situation and had someone respond, “Oh, so you’re a spammer.” Of course, usually people are kidding when they call you a spammer, but but being labeled a spammer is one of an email marketers' biggest fears.

You don’t even have to think you’re a spammer to feel bad. Many of us feel bad just for sending too many emails. Often solopreneurs are downright terrified of sending an email update to their subscribers. They say they don’t know what to say, but I think it’s that they’re afraid, somehow, that they’re bothering their subscribers. They aren’t sure they deserve to be in their inboxes, even if those same people signed up for their emails (through a double opt-in process, of course).

This is the wrong perspective. Good emails – well-crafted, targeted emails – are something that consumers and business colleagues like and want to get. That's why they signed up for them.

Even among millennials, who have a reputation for hating email, email is the preferred commercial communication channel, as this chart from the 2015 Millennial Research Study, published by The Principal Financial Group, shows: 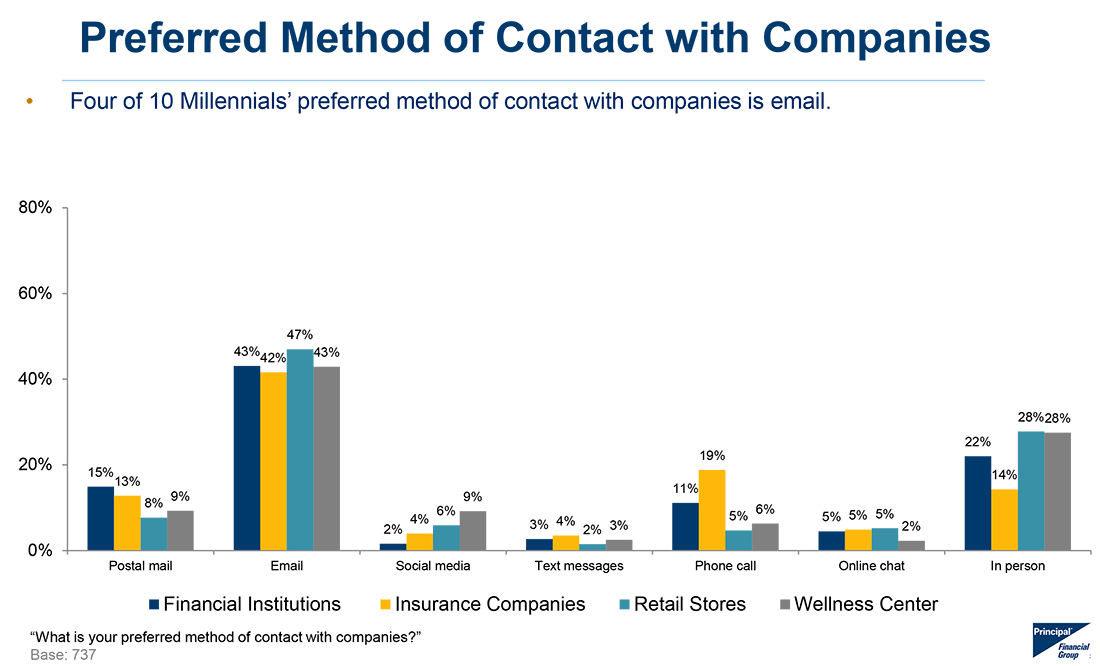 Still got confidence issues around sending email? Here’s another 2015 survey from Marketing Sherpa boasting similar results below. This is how survey respondents answered the question, "In which of the following ways, if any, would you prefer companies to communicate with you? Please select all that apply." 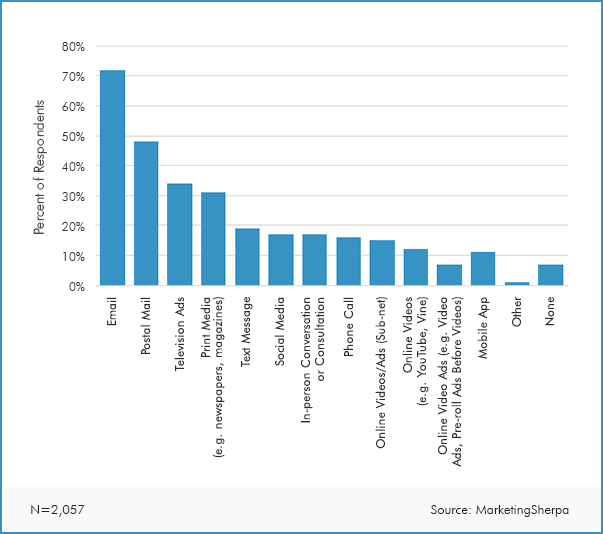 So lose the email guilt, already! And also embrace your business. Email continually comes in with the top ROI of any marketing tactic. That’s according to the Email Marketing Industry Census 2015 from eConsultancy & Adestra: 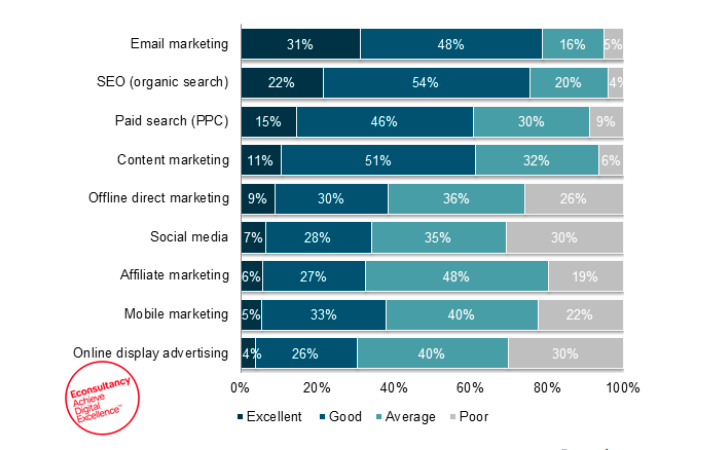 And a recent survey from Ascend2: 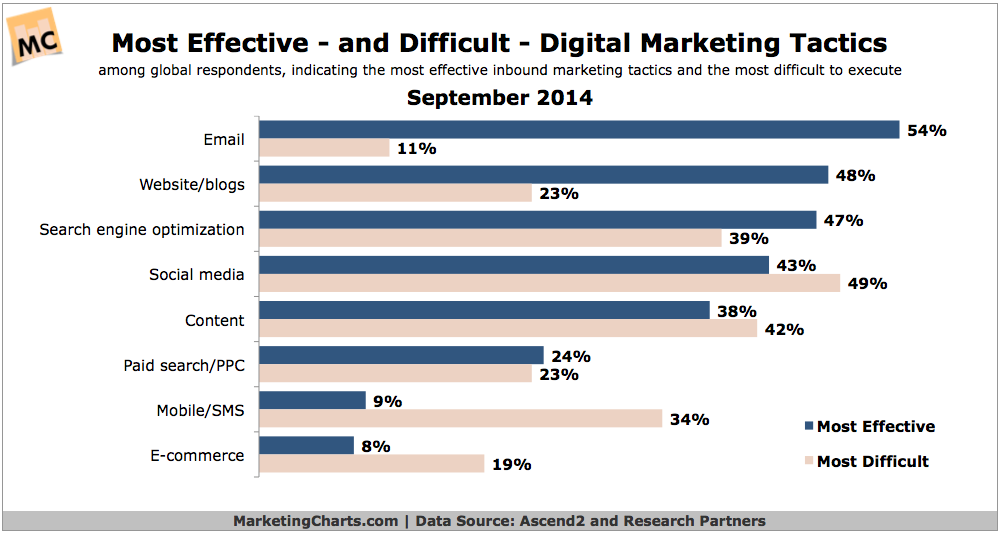 Here are just a few of the old, should-be-dead email marketing tactics that “email blast” brings to mind:

1) No segmentation, targeting or personalization.

“Blasting” suggests that you’re sending the same email out to all your subscribers. That there’s no personalization, even in the subject line. No dynamic content, and no way for subscribers to let you know which topics they’re interested in. In the example of my real estate marketer friend, her blasts go out all as one version to buyers and sellers alike.

This is not a recommended email marketing practice any more. The most successful email marketers segment their lists. The cutting-edge marketers are using things like dynamic content to take personalization even further. But even beginner email marketers can add a subscriber’s name to subject lines. Even that has been shown to give a nice lift when used appropriately.

Rather than giving people content they would be interested in, “blasts” sounds like we’re all but firing our messages out to people. Attacking them with our emails. No good marketer wants to do that. If people don’t want your emails, let them go.

As we wrote in an earlier post, 7 Email List Hygiene Best Practices for a Fresh & Clean List, it’s far better to let people unsubscribe – to make it really easy for them to unsubscribe – than to keep them on your list. Don’t blast people – force people – into getting your email messages. Email marketing at its best is not mass advertising. It is tailored, persona-driven, relationship-building, inbound marketing.

Anything you’d “blast” is something that didn’t have a lot of work put into it. You don’t re-use or save something that’s been blasted.

I wouldn’t go so far to say “blast” emails are the enemy of first-rate emails and email marketers. But they are a bit of a burden to those of us who are really trying to engage and delight email subscribers.

Would you “blast” out a Christmas card? A hand-written thank you note?

Using the word blast says a lot about how you view email marketing. And because so many of us are so very touchy about being characterized as spammers (or just feel bad about “bothering” our subscribers) even using a word that leans toward sounding like spam bothers us. Remember that there are always two definitions of spam. There’s the email marketers’ definition (the CAN-SPAM Act of 2013 definition), and then there’s the consumer definition. The consumer definition of spam is simple and complete: It’s email they don’t want.

5) Nobody wants to be blasted.

“Blast” also says a lot about how you view your subscribers. Are they people, or targets? Describing anything you send to an audience as a blast devalues them and you.

There’s no shortage of words to use to describe the emails you send to your customers. Here are just a few options:

There is also the term “broadcast”, but actually this one makes me itch a little too. It’s got a lot of the same issues that “eblast” has. It implies no segmentation and thus sounds like mass advertising.

How to make sure you never send another “eblast”

If you’re feeling a little uncomfortable right now, wondering if you haven’t been sending “eblasts” instead of “emails”, take heart. Everybody can change. Even a few tweaks to how you approach your emails can bring you over to the good side. Here are a few suggestions:

Never send an email you wouldn’t want to get.

2) Think of your subscribers as real people.

They have real concerns, hopes, frustrations and interests. Talk to them about those things. Don’t just tell them about your products of services. Tell them about how your products or services can help them. For an example, as a B2B marketer you need to learn to match your B2B content to your sales funnel. Show them how some of your customers or clients have solved their problems.

Start customizing your emails for your subscribers.

5) Make it super-easy to unsubscribe.

You heard me: Super-easy. Brain-dead easy. Just plain old “easy” is not enough.

That’s sending something useful and valuable to your subscribers four times in a row. Then on the fifth email, “take”: Pitch them something to buy.

I know a few of you just thought, “I cannot run my business like that”. So work with this. Instead of sending endless sale item emails, send just one “give” email a month. And what if you sent a really cool story of what someone has done with your products once a month? If you send weekly emails, just adding those two emails into the mix every month now means you’re on 1 to 1 schedule. Will your sales go down if you do this? Maybe a little. Will your engagement go up over time if you execute this well? Like a rocket ship.

Play the long game. Keep and engage your subscribers. Build their trust. Train them to read and share your emails. Move away from “eblasts” and closer toward what email marketing can – and should – deliver.

Pam Neely
Pam Neely has been marketing online for 15 years. She's a serial entrepreneur and an avid email and content marketing enthusiast with a background in publishing and journalism, including a New York Press Award. Her book "50 Ways to Build Your Email Marketing List" is available on Amazon.com. Pam holds a Master's Degree in Direct and Interactive Marketing from New York University. Follow her on Twitter @pamellaneely.
Related Posts 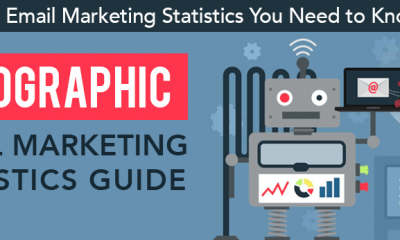 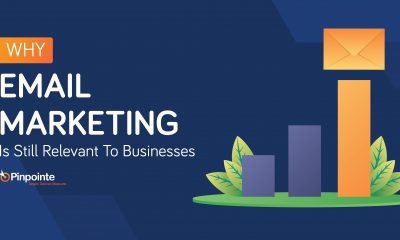