Organized lists are a good thing, so you can create multiple, separate lists in Pinpointe. We make it easy to add new lists and import email contacts, update settings, build profiles, and correct common errors on email addresses. Best of all, the system walks you through each step, so you don’t make mistakes.

For example, you can use separate lists for monthly newsletters, existing customers, customers with special interests and so on. Each list can have its own set of custom fields too, for even better targeting precision.

With Pinpointe, you can even organize your lists in a structured, hierarchical manner – see the display below.

When creating and/or importing your lists, Pinpointe does the email list de-duping for you, so you don’t have to worry about a contact getting multiple copies of your latest correspondence.   Better yet, if you’re sending a campaign to multiple lists, Pinpointe automatically de-dupes names across all lists before sending all those emails into Etherspace. 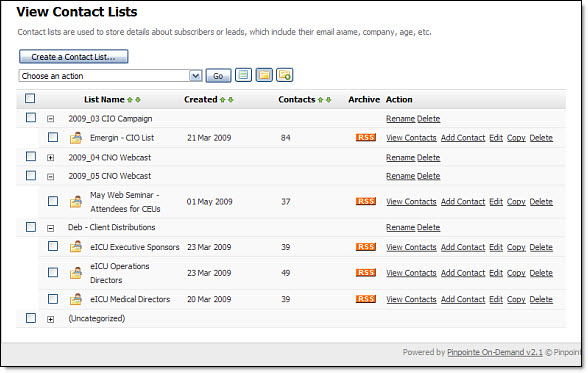 Additional Information
Additional Information
Search Pinpointe
I am the footer call-to-action block, here you can add some relevant/important information about your company or product. I can be disabled in the theme options.
GET A DEMOGet In Touch
Copyright Your Business LLC. 2022 - All Rights Reserved
Back To Top